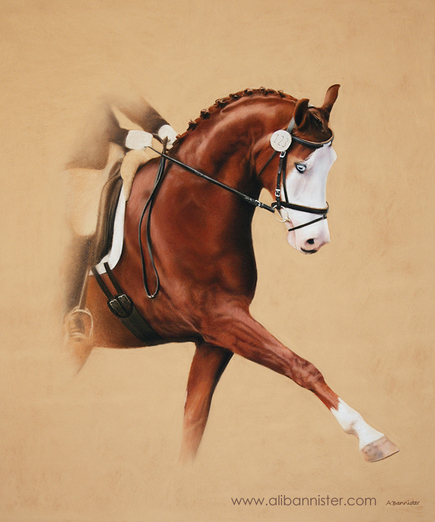 Dacquiri, a Dutch warmblood, was purchased as a long yearling as a future Dressage prospect.  In his owner’s words, ‘We wanted to buy a yearling knowing that it is a gamble, but we wanted to have a horse that we could have before the training began so that we could get to know his personality.

When I went to look at the yearlings with my trainer to get some video, I was overwhelmed!  As I walked by Dacquiri the first time I said, "Absolutely not", no chestnut and 4 white socks and blue eyes, no way!  I was a bay person all the way.  We video'd the yearlings in sets of two.  Dacquiri was one of a set, and I was trying to look at a "bay"!  Dacquiri was a bit of a camera hog and kept running in front of the horse that I was trying to look at…that was my first message that I did not get!  We got our videos and set off home.

Then it was time to ask/beg my husband for a horse.  I decided that I would let him pick the horse.  We had bred, raised and showed cutting horses for many years and he had/has quite an eye for talent, and he is color blind so he is not influenced by color.  He spend may hours standing on the sidelines of many dressage shows asking us which horses had the movement that we liked and he very quickly picked up what "in our opinion" was a great moving "Dressage" horse.  So, he viewed the videos and promptly said "if it is the movement that you are looking for, it is Dacquiri" and I responded, "but he is red and has 4 white socks and blue eyes!"  So, I looked at the videos again and saw what he was saying, and realized that maybe Dacquiri was saying "pick me" as he would not let me see the other horse as every time they turned another direction in the turnout, Dacquiri was blocking the view of the other horse.

I put my trust in my husband and my trainer as she really liked him too.  So we came home with the red one with all the white and blue eyes!  He is 7 years old now and has exceeded all our expectations in his Dressage work!  He is extremely athletic and an incredible mover!  My dressage trainer, Stacee Collier, has done a wonderful job starting, training and showing him.  He will be showing PSG this year.  Craig and I feel very blessed to have the opportunity to own such an incredible horse.’

It has been a privilege to follow Dacquiri’s progress and to work on his portrait. I’m convinced that I will have to draw him again before too long as he is changing, improving and growing in himself all the time. I think we are have only seen the tip of the iceberg with this horse; and that tip has been something well worth seeing.